The birds of prey in southern Spain

Birds of prey in south Spain: species and identification

Spain is widely considered as the country in  Europe where you want to go to watch raptors. These are the diurnal birds of prey that can be found in South Spain: 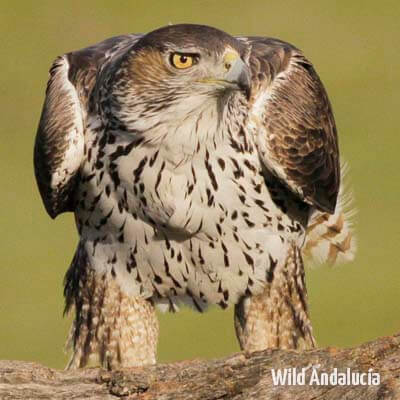 Our most emblematic medium/large sized eagles. It is also one of the most scarce ones. A very intelligent bird that remains unperceived by its long periods roosting. In Spain, we call it "águila perdicera", that is partridge-eater eagle. Easy to identify for its square-cut tail and broad wings, the adults showing a black carpal and wing bar. Average wingspan: 160 cm in males, 170 cm in femailes. The Aquila fasciata lives in dry and open mountains, preferably very in cliffy areas. It preys rabbits and pigeon-sized birds. Its population has dramatically decreased in the last years, estimated in 750 pairs (2016). A very localized eagle in Spain,  whose andalusian population seems stable, easier to be found in south and west of Iberia. Its IUCN BirdLife status (in Europe) is endangered. 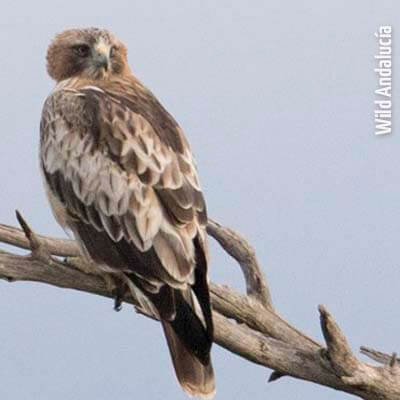 It is our smallest eagle and it is surprisingly athletic and brave. Our Aquila pennata is mostly a summer visitor but with a small resident population in Andalucía. Its average wingspan is 120 cm. Generally speaking, we can say it is a forest eagle and prefers building their nests on trees. It is very easy to recognize by the adult black and white underwing colors on flight. There is also a dark morph which reminds us to the colors of any juvenile eagle. They have a broad diet from insects to pigeon-size birds. You can find it anywhere in Spain and it is the most common eagle in Iberia. Its population in Spain moves around 19.000 pairs. Species non threatened in Spain. 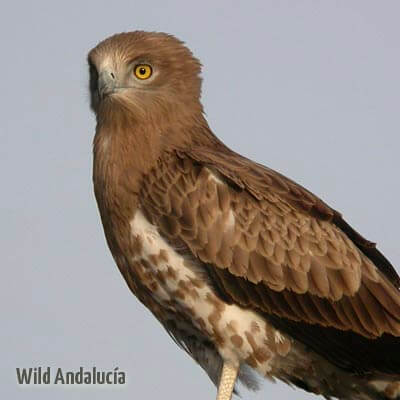 Another of our "common" eagles, comes to Spain to breed. Circaetus gallicus likes open arid landscapes with trees nearby.It foods mainly reptiles and nests on trees. It is rather vocal during the breeding season. It is an easy species to recognize for its long and narrow wings. Its wingspan is 180 cm. When on flight, the underside colour is very pale with a dark bib, although as it ages the dark patch will be more prominent. It hovers regularly and feeds mainly on snakes, therefore its decrease in areas where reptiles have reduced their presence. Around 18.000 Short-toed Eagles cross the Strait of Gibraltar every season in migration. 2.700 breeding pairs in Spain, 2003. Species non threatened in Spain. 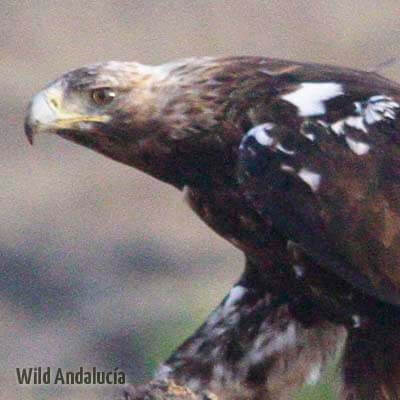 Perhaps this must be chosen to be the Spanish National Bird. Nearly restricted to the Iberian Peninsula and mostly to Spain, The Spanish Eagle has increased its presence in Spain from 253 pairs in 2009 to 500 pairs in 2016. Adult birds are sedentary, whereas juveniles disperse themselves. They normally nest on trees, for its native habitat is the mediterranean forests, where big quercus genus oak species grow. In these forest the eagles feed primarily on rabbits, then other birds. Its IUCN BirdLife status is vulnerable. 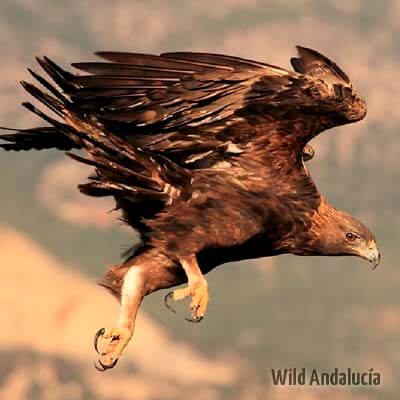 In Spain lives the Aquila chrysaetos homeyeri subspecies. These impressive and large eagles need remote mountainous open areas far from human disturbance to stablish their populations. Adults are sedentary and they build their nests either on trees of cliffs. Juveniles tend to disperse. In Spain they prey medium sized mammals and birds. Persecution is still today one of its main threatens in Spain. There were 1.500 pairs of Golden Eagle in Spain in 2016. The population in Málaga province was of 23 breeding pairs in 2003. Its wingspan ranges from 190 to 230 cm and surprisingly its IUCN BirdLife status is least concern in Europe, nearly threatened in Spain and vulnerable in Andalucía.

Pandion haliaetus lives in the proximity of masses of water that can provide a regular supply of fish. It has a 160 cm wingspan. It is a species whose European populations winters in Africa, but on the last years some of these birds prefer to spend the winter in Spain. Its pupulation in Spain is not quite big. The Odiel marshes in Huelva is a regular site where they don't just overwinter but also breed on some nest towers. Besides, it can be observed crossing the Strait of Gibraltar on migration and on nearly every wetland in passage. Its IUCN BirdLife global status is least concern. 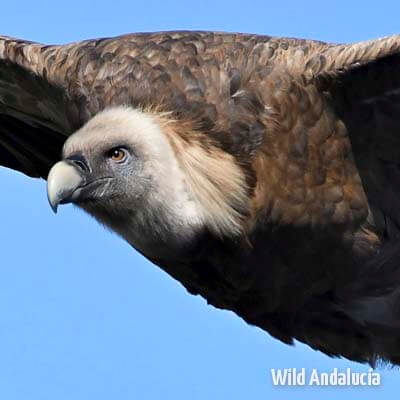 The most common vulture in Iberia, a large bird of prey with broad wings and bigger than any eagle. Its population was some 25.000 pairs back in 2008. We're very happy to have circa 600 breeding pairs of Griffons on our area (Serranía de Ronda). Around half of the juvenile vultures cross the Strait of Gibraltar on their first autumn. This is a delightful and overlooked migratory movement that peaks from mid October till Mid November. It is catalogued as non threatened in both Spain and Andalucía. 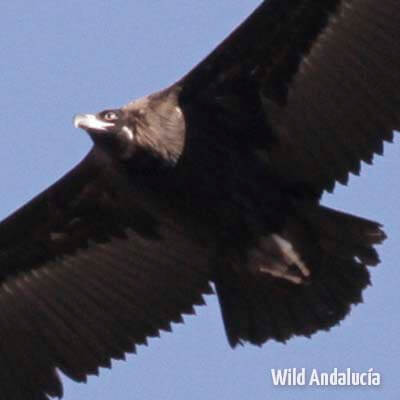 The Eursasian Black Vulture, also called Monk Vulture -Aegypius monachus- has the largest wingspan among the Spanish birds of prey. Its population is 1800 pairs in 2009. Juveniles travel long distances. 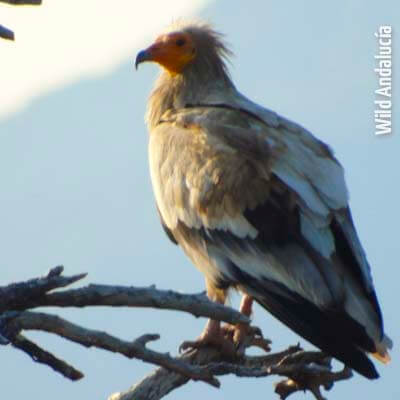 Mostly summer visitor with a small resident population in Spain. Neophron percnopterus is a medium size vulture whose population is decreasing year after year. Its flight silhouette is very characteristic: small head, narrow bill, broad wings and wedge shaped tail. Its population was 1.500 breeding pairs in 2008. Its IUCN BirdLife status is endangered in Spain and critically endangered in Andalucía. 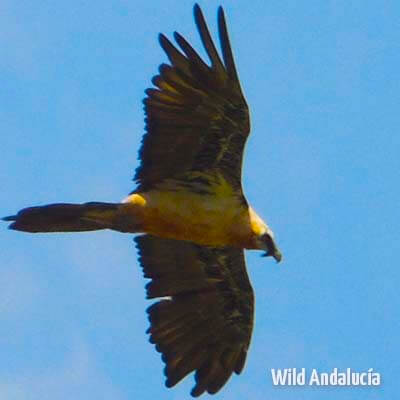 The Bearded Vulture -gypaetus barbatus- is one of our must-see birds. Traditionally, birders would have to travel to the Pyrenees to see these, but since its succesful reintroduction programme in Sierra de Cazorla, Segura y las Villas, it can be seen flying locally in the wild Andalucía. We propose a 2-3 day tour to enjoy this magnificent bird. There were just 70 pairs of Lammergeiers in Spain in 2008. The recovery of this species has been very positive thanks to Gypaetus charity, and so there is around 1.000 Lammergeiers in the whole Pyrenees (Spain + France) plus other Spanish territories by 2019. It was the first bird of prey protected in Spain.

A very common species that delights the birdwatchers with its massive numbers as they cross the Strait of Gibraltar. The records show masssive numbers in migration, as many as 170.000 birds in spring and 230.000 in autumn. Its IUCN BirdLife status is nearly threatened in Spain.

Sadly this species is becoming scarce and localised. Census show a wintering population of 30.000 birds in 2008. Its IUCN BirdLife status is endangered in Spain and critically endangered in Andalucía. 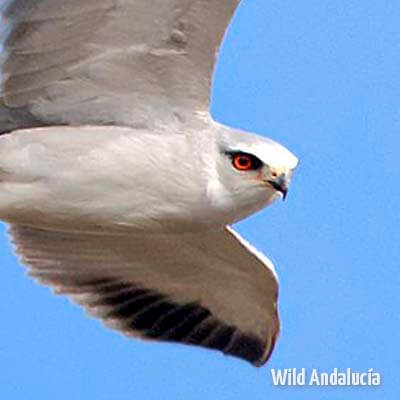 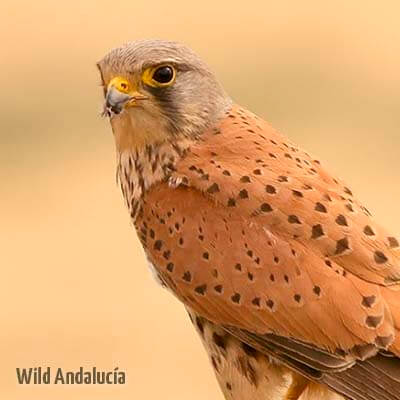 Resident and abundant, distributed all over spanish territory. Non threatened. 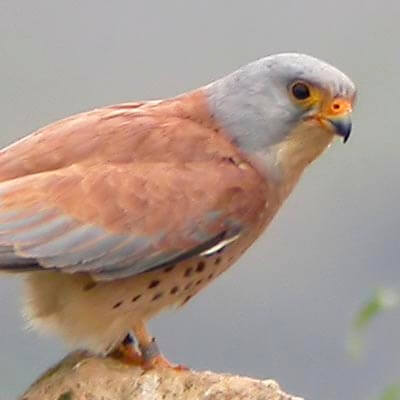 Lesser Kestrels are one of the most colourful summer visitor birds of prey in Spain. It is in southwest Spain where it is more common and has a resident population along the Sevilla - Doñana area. It is a bit smaller than Common Kestrel and tends to socialize more. Census show a population of 12.000-20.000 breeding pairs in Spain in 2008. Likewise, some 320-390 pairs distributed in 60 colonies in Málaga province. Its IUCN BirdLife status is vulnerable in Spain and nearly threatened in Andalucía. 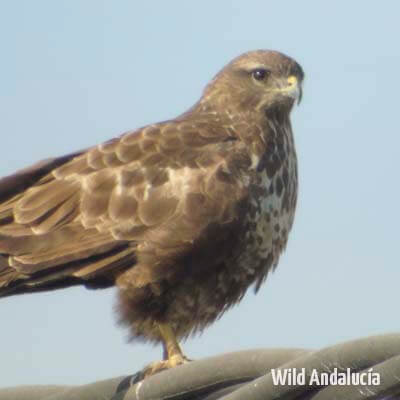 In Andalucía it is a bird that we find on passage and in big numbers. Perhaps the most spectacular bird that one can see passing by anywhere in the south of Spain. 900-1.300 breeding pairs in 2003 in Spain. Some 68.000 birds migrate across the Strait of Gibraltar every year, with peaks of +2.000 birds daily. 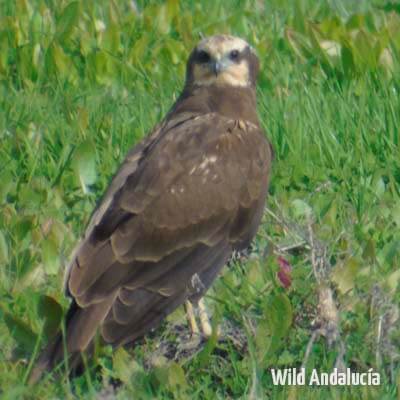 Over 850 breeding pairs in Spain in 2003, distributed mainly in Castilla y León, Ebro valley and Western Andalucía. Marhs Harrier winters mainly in the South and East of Spain (Ebro Delta, Albufera, marshes...). Its IUCN BirdLife status is vulnerable in Spain and endangered in Andalucía.

Hen Harrier, aka circus cyaneus. Over 800 breeding pairs in Spain, mostly in the north of the country. It is a winter visitor in central and southern Iberia, with a few thousand birds. Non threatened. 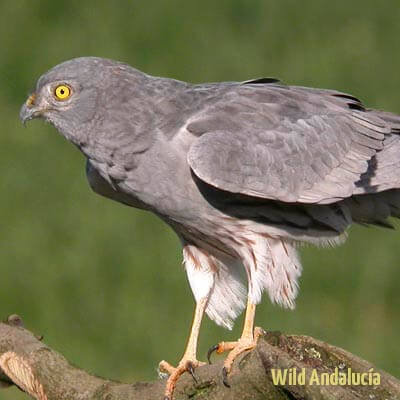 Circus pygargus. This smart harrier with a very slim shape visits Spain to breed in summer. Its spanish breeding population was over 4.900 pairs in 2003. As it nests on the ground, its population has dramatically gone down due to modern farming practices, when the fields are cropped early and also big extensions lack of insects, small mammals and general biodiversity. Mellanistic individuals are more common in northwest Spain. Its IUCN BirdLife status is vulnerable in Spain and Andalucía.

Accipiter gentilis is a resident and very scarce and localised bird of prey in Spain. 3.500 to 6.500 breeding pairs in Spain in 2003. North and central Spain are more favoured for this species than Andalucía, where it is very scarce. Its IUCN BirdLife status is non threatened.

Accipiter nisus is a resident species of forested mountains, with influx of wintering birds from northern Europe. 6.000-10.000 breeding pairs in Spain. Non threatened.

A scarce winter bird in the south, but more common in Castilla León and the Ebro valley. The size of a dove, falco columbarius flies almost touching the ground along farmlands and wetlands.

Falco subbuteo is a small dark coloured and striped falcon with very long wings. Although it is not a common bird, it can be seen on passage and more easily in northern Spain -breeding-, from April till October.

Falco eleonorae is a breeding species in the spanish islands. There is a black and a white morph, this latter being more common. Winters in Madagascar and East Africa. Breeds locally in cliffs of theh Balearic island, Columbretes and Lanzarote. It can be seen occassionally in Catalonia and The Strait of Gibraltar. 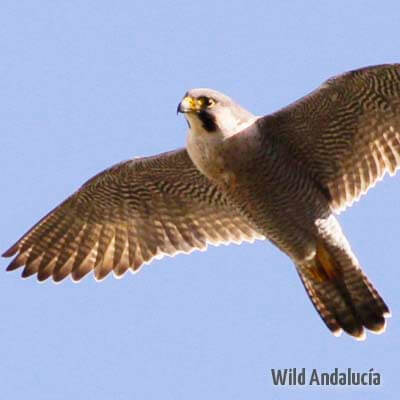 This is the most common and powerful falcon in Spain. The female is significantly larger than the male. It is both a resident and wintering bird in Spain. Subspecies brookei is a common breeder but very widespread. Besides, we have seen the peregrinus and the calidus subspecies wintering in Andalucía. 2.600 pairs in Spain 2008. Census in 2008 produced 40-48 breeding pairs in Málaga province. Its IUCN BirdLife status is vulnerable in Andalucía.

Within Spanish territory falco pelegrinoides can be found only and locally in the Canary islands. This bird of prey is very similar to falco peregrinus but has a rufous area on its nape. Its IUCN BirdLife status is 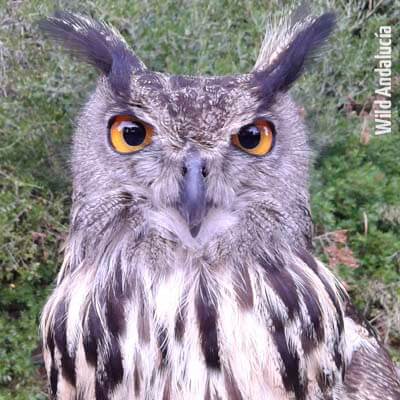 Resident. Its population is increasing. Recommended site: Ronda area and its gorges. Its IUCN BirdLife status is 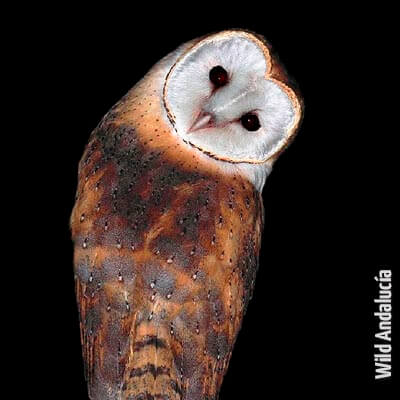 Althoug it is a resident bird, it is becoming more and more scarce. Recommended site: northern shore of Doñana. Its IUCN BirdLife status is

A very sought-after winter visitor. Recommended site: the high grass among swamps of Doñana. Its IUCN BirdLife status is 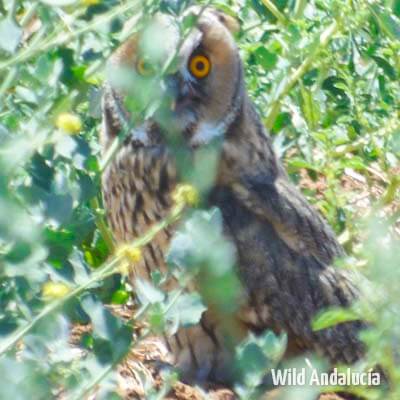 Summer visitor. Locally common in the mountains. Its IUCN BirdLife status is

Resident, both grey and brown morphs. Hering its call is generally easy in South Spain. To see it in its natural mediterranean forest you can contact us. Its IUCN BirdLife status is 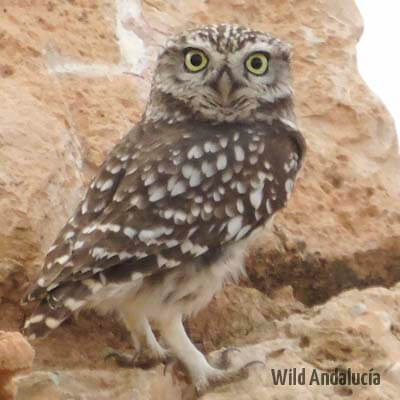 Resident and very well distributed in the country. Its IUCN BirdLife status is

Other birds of prey

Catalogued as rare bird in Spain. One of the best sites to see them in South Spain is in the Strait of Gibraltar.

In Wild Andalucia we have a special interest for raptors. You may contact us for professional and friendly advice.